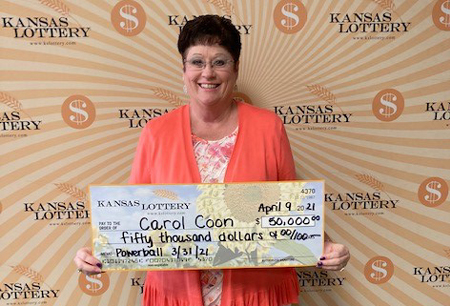 A Winfield woman has just claimed a $50,000 Powerball prize from the March 31, 2021, drawing! Carol Coon shared that she and her husband, Kevin, had joked the day after the drawing that his itchy palm meant they were about to come into some money. The light-hearted joke turned into reality once the couple learned their ticket matched four numbers and the Powerball to win the prize. The winning numbers on March 31, 2021, were 3 – 10 – 44 – 55 – 68 Powerball 24.

It wasn’t until a few days after the drawing that she learned the truth about her ticket, though. Coon asked a friend and employee to take a few Powerball tickets to the local gas station to see if they had won anything. When she returned, she gave Coon $8 from one of the tickets, but paused before breaking the great news to her.

“She just sat there and told me my ticket must have won a large prize because the store didn’t even know the exact amount,” Coon recalled. After looking up the winning numbers from the drawing, the winner soon learned of her $50,000 win after realizing the Quick Pick ticket matched four numbers and the Powerball!

Coon met up with her husband shortly after, and reminded him of his itchy palm and placed the $8 in his hand. “He joked that his palm itched a little bit harder than that, and that’s when I told him the rest of the story,” she laughed.

“Everybody was so excited and happy for us, and wanted to tell everyone else in town! But we wanted to wait to share the news until we came to Topeka to claim,” the winner added. “The win didn’t feel real until after I finished claiming.”

Coon doesn’t yet know how they’ll spend the money, but thought they might spend some of it on an auction and most will go into savings.

The winning ticket was sold at Ming’s Asian Market at 610 Main St. in Winfield.