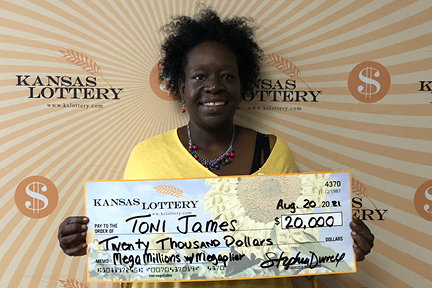 A Wichita woman had double the luck on the first Mega Millions ticket she ever purchased! Toni James prefers to buy scratch tickets, and will also dabble in Powerball and Lotto America, but she figured she’d try her luck with a Mega Millions Megaplier ticket on a trip to the gas station on August 13.

“It was the first time I’ve ever played Mega Millions, so I didn’t really know how to fill out the play slip. I told my friend to fill out the first numbers that came to his head,” James shared. “I didn’t even know how much I won until Thursday night when I asked the retailer to cash me out and she told me I had to go to Topeka to claim my prize.

James told only a few family members, one of whom didn’t believe her until he looked up the numbers for himself. “I had to send him a picture of the ticket for him to believe me,” James laughed.

The winner is excited the prize will help her pay off some debt and bills.

The winning ticket was sold at QuikTrip 328 at 2801 S. Hydraulic Ave. in Wichita.