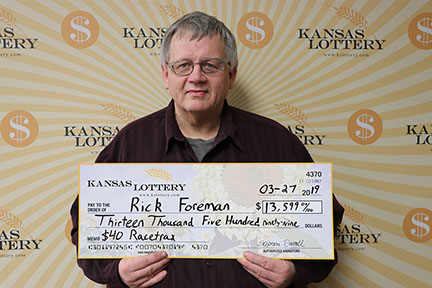 Rick Foreman of Wichita would be the first to tell you that it only takes one ticket to win big with the Kansas Lottery! He bought his first-ever Racetrax® ticket and won $13,599 on a Superfecta Wheel bet.

“I had never played Racetrax before, but I wanted to try it out for a while. So I grabbed a play slip and thought I had marked a $4 single race bet, but I had made a mistake and marked it for 10 races,” Foreman explained. Foreman’s mistake made the ticket worth $40.

Even though the ticket was more than he planned on spending, Foreman decided to go ahead and make the purchase.

“I got the ticket and sat back down at the table to watch the races. It was the fourth race that won for me, so if I hadn’t bought the ticket, I wouldn’t have won,” Foreman said. “When I told the clerk I thought I had hit the Superfecta, she didn’t believe me. Then she checked the ticket and it said to ‘redeem in Topeka’ and we both started laughing!”

Foreman won his prize all the way back in February and had to wait for a day off before he could come to claim it.

“I called the Kansas Lottery office the next day and confirmed my win. I signed the ticket and hid it in a safe place. I finally got some time off this week and was able to make the trip up to Topeka,” Foreman said.

“I have some bills to pay off and I’ll probably just put the rest into savings for now,” Foreman explained. “And I’m definitely going to keep playing Racetrax! It’s my new lucky game.”

The winning ticket was sold at Mick’s Bar & Grill at 1155 S. Washington in Wichita. Racetrax is a daily draw horse racing game, with races every five minutes!