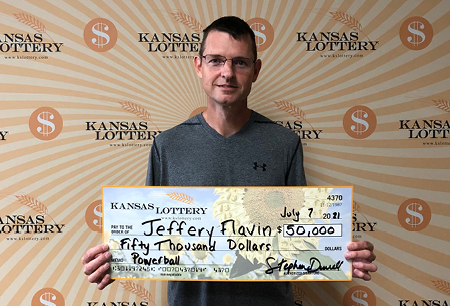 Being born on the Fourth of July, Jeffery Flavin’s birthday has always been a bit special. But this year, the day was even more festive after the Russell man matched four numbers and the Powerball to win $50,000 from the July 3 Powerball drawing! The winning numbers on July 3 were 26 – 40 – 41 – 55 – 65 Powerball 24.

Flavin usually purchases a single ticket every few weeks, and as he went into Casey’s to grab a slice of pizza, he decided on one line of Quick Pick Powerball numbers.

“You know, I almost bought a scratch ticket, but this time I just decided on the Powerball,” he shared. “I had to get back to work and forgot about the ticket until Monday.”

On their way home from visiting his mother after the Fourth of July holiday, Flavin had his daughter check the numbers on the Kansas Lottery website.

“She told me I had most of the numbers, but didn’t know for sure how much it had won until she used the ‘check my numbers’ tool,” Flavin said. “I thought it won maybe $2 or something small, but then it showed us how much the ticket actually won and that’s when we got really excited!”

The Russell man wasn’t the only one excited about his great luck—he immediately told his family and friends, who all congratulated him, with one friend saying it felt like he “won the lottery with me.”

While the winner plans to spend a bit of the money on the family’s already-planned trip to Omaha, Flavin thinks maybe they’ll all go on a bigger vacation later on in the year as well as stash some of the money into savings.