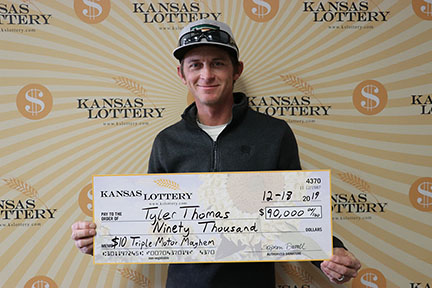 Tyler Thomas of Rosalia has had quite a month! First his son finished 5th in the world at the Miniature Bull Riding World Finals in Las Vegas, and now Thomas has a new $90,000 Ford vehicle prize that he won playing the $10 Triple Motor Mayhem instant game!

“It was a real whirlwind experience,” said Thomas. “We were packing up and getting ready to hop on a plane for Las Vegas that next morning, so I went to the store to grab a few things and to put gas in my truck.”

While waiting in line, Thomas decided to try his luck with the Triple Motor Mayhem game, which he had been consistently playing since it launched. He bought the tickets and went back to his truck to scratch them off.

“I bought two tickets, and decided to scratch them off there in the vehicle. It was the second ticket that had the winning symbol on it. It said “auto” in the prize spot, and I didn’t notice it at first,” Thomas said. “I did a double take and realized what it said, so I took it back in the store to check it and they confirmed it was the big winner. My jaw about hit the counter I was so surprised!”

“I didn’t know what to do with the ticket, because we were getting on a plane in just a few hours to go to Las Vegas! So I signed the ticket and took it to my parent’s house and put it in a safe,” Thomas added. “I knew it would be safe there.”

The next step was to decide which vehicle to choose as their prize. Triple Motor Mayhem winners got their choice between a 2019 Ford F-150 Raptor SuperCab, 2019 Ford Mustang GT Premium Convertible, or a 2019 Ford Expedition XLT!

“Between rodeos and all the other sporting events that our kids compete in, we’re traveling all the time,” said Thomas. “What we really need is a great family vehicle, and the Expedition XLT is perfect for our needs. It’s truly a blessing as we’ve been on the market for a family vehicle for a while now!”

The winning ticket was sold at Fastrip Haverhill at 2028 Southwest 100th Street in Augusta, Kansas. This was the last top prize in the $10 Triple Motor Mayhem instant scratch game. The game will be ended, and players will have 6 months to claim any remaining prizes in the game.