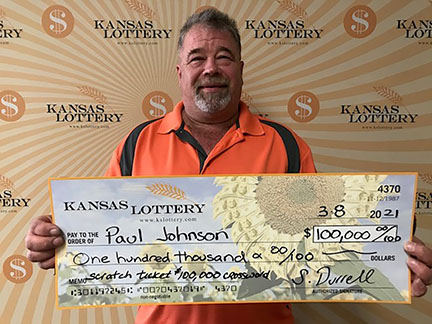 The last month has been a wild ride for Paul Johnson of Kansas City, Kansas. Johnson, a mailman, delivered through a polar vortex and huge temperature swings as Kansas dove right into spring. His crazy month ended in a ray of sunshine, though, as Johnson is now $100,000 richer after hitting the top prize in the $10 $100,000 Crossword!

“I didn’t realize at first how much I had won,” Johnson said. “I was on my way to the office and I knew I had won something but didn’t know how much. It wasn’t until I was leaving for my route that I took a second look and counted how many words I had!”

Johnson told his supervisor about his good luck, and went to put the ticket in a safe place at his father’s house while he finished his route for the day.

“I’m not exactly sure what my long-term plans are with the winnings yet,” said Johnson. “The first thing I’m going to do is pay off any debt I have. It’s going to be awesome to be debt-free! Other than that, I’m not a super extravagant guy. Mostly I’m excited to share my good fortune with my family.”

The winning ticket was sold at Fast Stop 12 at 945 South 55th Street in Kansas City, Kansas. There are still two top prizes left in the $10 $100,000 Crossword instant scratch game, plus thousands in other prizes!