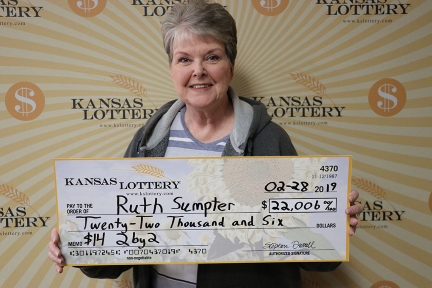 Ruth Sumpter of Ottawa was thrilled after learning she had been carrying a $22,000 winning Kansas Lottery 2by2 ticket in her purse for two weeks! She bought the winning ticket on February 13 but didn't check it until February 27.

"I bought the ticket the day before Valentine's Day and didn't really think to check it again until I was getting gas this week," said Sumpter. "I was just walking around for two weeks with a big winning ticket in my purse! It was a complete shock when I checked the ticket."

Sumpter said she started playing 2by2 multi-draw tickets so she would become eligible to win on 2by2 Tuesday, which is when all prizes are doubled. Sumpter's winning ticket was for 14 drawings, which she explained is why she waited so long to check it.

"When I had the clerk check the ticket for me, it said to sign the back and take it to Topeka. I knew that meant it was more than the store could pay me, but the clerk didn't know what I had won," Sumpter said. "When I looked up the game's prize structure was when I realized the only winning amount that was too big for the store to pay me was the top prize!"

Sumpter added while she doesn't know what she'll do with her winnings, a trip could be in her future.

"It has been a while since we've been to Las Vegas, so it might be time for a vacation!"

The winning ticket was sold at the Ottawa Mini Mart on 2120 South Princeton Street in Ottawa. 2by2 is a daily draw game with eight ways to win! Drawings for the game are held every day at 9:30 p.m.