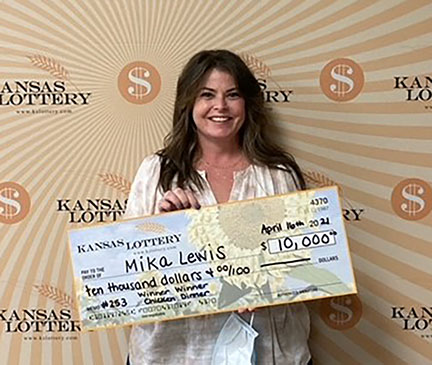 TOPEKA, KAN. – When Mika Lewis of Olathe arrived early for her appointment to get her tires changed, she decided to stop and grab some Kansas Lottery scratch tickets to pass the time. She purchased one $2 Winner Winner Chicken Dinner ticket, and that ticket was a $10,000 top prize winner!

“I was sitting in the waiting room at the tire shop when I scratched off the ticket,” said Lewis. “At first I just assumed I was looking at the ticket wrong. There’s no way I won that much. But eventually, after checking and double checking, I started to realize that it was real and I had won!”

Lewis said she tried her best to remain calm but the workers at the tire shop noticed her frantically checking her ticket over and over again.

“He looked over at me and said, ‘Did you just win the lottery?’” said Lewis with a laugh. “I was still in shock and all I could say was, ‘Well…yeah, I kind of did!’ He congratulated me and started laughing as well.”

Now that she’s come to Topeka and claimed her prize, the next step is deciding what to do with her winnings.

“My daughter is about to graduate with her Master’s in Atlanta, so we already have a trip planned for that,” Lewis said. “I’m thinking now that trip might turn into a real family vacation in Florida! The rest will probably just get put into savings for now.”

The winning ticket was sold at Price Chopper 700 at 175 North Parker Street in Olathe. There are still five top prizes, as well as thousands in other cash prizes, left in the $2 Winner Winner Chicken Dinner instant scratch game.