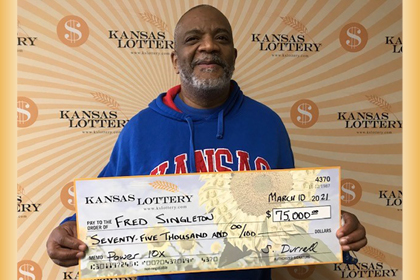 For Fred Singleton of Kansas City, Kansas, his steadfast method for buying lottery tickets has paid off with an electric $75,000 win! Singleton typically purchases the same number of tickets when he makes a trip to the gas station, and this time one of them won the top prize in the Kansas Lottery’s new $10 Power 10X game.

“I almost always buy four $10 tickets at a time,” Singleton said of his routine. “And I’ll usually try out the new tickets and look on the Lottery’s website to see which games have the most top prizes remaining.”

Singleton added that he’s been having a string of good luck on the Power 10X ticket that was released just a few weeks ago, and he only got luckier when he nabbed the top prize of $75,000!

“On the last of my four tickets, I started scratching from the bottom,” he said. “On the very first row I scratched, it said it won $1,000, and then I kept scratching and all but three rows had won a prize! Since the ticket ended up having a 5X multiplier, it ended up with the big win.”

Because he couldn’t believe what he was seeing was real, he had his son double-check the prize for him before calling the Kansas Lottery immediately to confirm the win.

The winner says the money will help him purchase a new vehicle he’s had his eye on, as well as pay off debt.

The winning ticket was sold at QuikTrip 239R at 555 N. 78th St. in Kansas City, Kansas. There are still two top prizes in the $10 Power 10X game, plus thousands in other prizes!