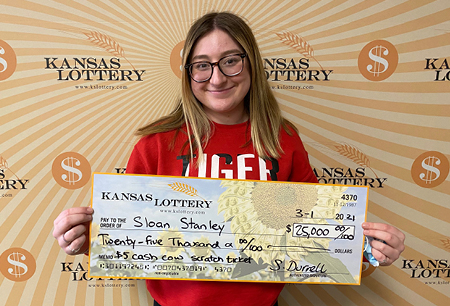 A Meriden woman has won the first $25,000 top prize in the Kansas Lottery’s $5 Cash Cow instant game, just four days after her 18th birthday! Sloan Stanley decided to buy her very first—and only—lottery ticket while at work and scratched to reveal the huge win!

“I bought the Cash Cow ticket because I like cows and thought it was cute,” Stanley laughed. “I was in shock that the first ticket I ever bought ended up winning $25,000!”

The winner told her father first, who didn’t believe she had won what she claimed. But after reviewing it himself, he concluded Stanley was correct! “My family is all super excited and happy for me, and they still can’t believe it!” she said.

Stanley plans to attend Fort Hays State University in the fall to study Elementary Education. “I’m excited to start college later this year and I hope this will help me graduate without debt!”

The winning ticket was sold at Country Harvest Apple Market at 7312 K-4 Highway in Meriden. There are still five top prizes in the $5 Cash Cow instant scratch game, as well as thousands in other prizes!