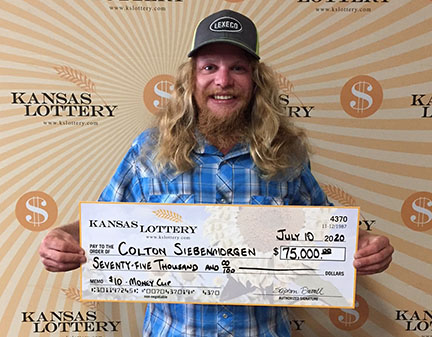 Colton Siebenmorgan was finally able to claim his $75,000 top prize he won playing the Kansas Lottery’s $10 Money Clip instant scratch ticket. The Leavenworth man has been holding on to the winning ticket since May!

“I thought about just mailing the ticket in to the Lottery to be claimed, but it made me kind of nervous,” said Siebenmorgan. “I decided instead to put the ticket in a safe place and just wait it out until I could come claim in person!”

Siebenmorgen won the prize while on the road for work. He was with his father in a hotel room when he scratched off the winning ticket.

“We stopped after work at a gas station, and that’s when I purchased four tickets. We took them back to the room, and it was the second ticket that was the big winner,” Siebenmorgan said. “Neither one of us could believe it, so we went back to the station to check the ticket and it said to redeem in Topeka, and that’s when we knew it was the real deal!”

The wait time to claim the ticket was a little nerve-wracking for Siebenmorgan, but it did allow for him to consider what he would do with his winnings once he finally had the prize.

“I thought about it, and I’m going to invest a big chunk of the prize money. I’m going to work with an investment advisor and start saving up for retirement now,” Sibenmorgan said. “I might keep a little bit for some financial cushion, but the rest is going to be invested. Invest now, retire early!”

The winning ticket was sold at Casey’s General Store 2004 at 624 South Washington in Junction City. There is still one top prize left in the $10 Money Clip instant scratch game, as well as thousands in other cash prizes!