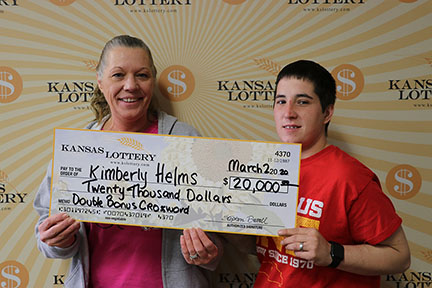 While on a trip to Belle Plaine over the weekend, Kimberly Helms stopped at a convenience store where she purchased four Kansas Lottery $2 Double Bonus Crossword instant scratch tickets.  The Cheney resident couldn’t believe her luck when she revealed a $20,000 top prize on the second ticket she played!

Helms’ favorite lottery game is Crossword. “I buy Crossword tickets two to three times a week,” said Helms. “Sometimes I’ll buy the $5 or $10 Crossword games, but on Saturday, I wanted to play more than a few games, so I got four of the $2 Double Bonus Crossword.”

The lucky winner scratched her tickets when she returned to her car and was in shock when she revealed a $20,000 top prize on the second ticket she played. “I’ve never won any prize this big before!” said Helms. “I rechecked my ticket over and over to make sure I hadn’t accidentally played the wrong letter.”

Helms immediately called her daughter, Sarah, and her parents to share the exciting news. “Everyone kept asking me, ‘Are you sure it’s a big winner?’ They were all excited when I told them it really was!” Helms said.

On Monday, Helms brought the winning ticket to the Kansas Lottery in Topeka to claim her prize. She said she plans to use the winnings to help pay for her daughter’s wedding this coming fall. “This will go a long way to making the day even more memorable,” she said.

The winning ticket was sold at Casey’s General Store 2947 on 400 North Logan in Belle Plaine. There are still 25 $20,000 top prizes left in the $2 Double Bonus Crossword instant scratch game, as well as thousands in other prizes!