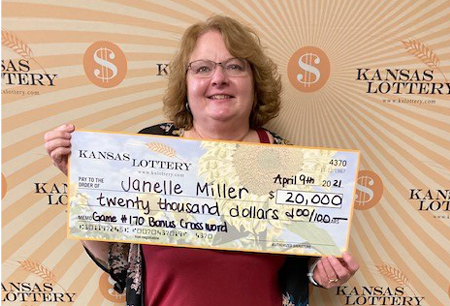 A rough week ended in a bright spot for a Topeka woman as she has just won $20,000! To cheer up his wife after a long week, Janelle Miller’s husband brought four scratch tickets home from the gas station. Miller left the tickets unscratched until the next day, and couldn’t believe her luck when the second of two $2 Double Bonus Crossword tickets nabbed the top prize!

“I honestly couldn’t believe it! I kept double checking, and wrote all of the words down just to make sure I wasn’t seeing things,” Miller described.

The winner’s husband didn’t believe Miller when she told him she had won the $20,000 prize. “He told me that I was crazy until he looked at it himself and said, ‘I think you won too!’” she recalled.

While Miller is still getting over the shock of her good fortune and does not have any concrete plans on how to use the prize, she believes some of the money will go toward her daughter’s wedding and to take her husband out for dinner.

“I just want to thank the Kansas Lottery for selling the game; I couldn’t have won without being able to buy the tickets,” the winner added.

The winning ticket was sold at Kwik Shop 781 at 4500 S. Topeka Boulevard in Topeka. There are still seven $20,000 top prizes left in the $2 Double Bonus Crossword instant scratch game, as well as thousands in other prizes!