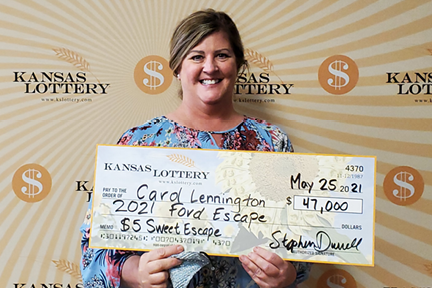 Carol Lennington has cruised her way into a sweet ride after nabbing the first top prize in the Kansas Lottery’s $5 Sweet Escape instant ticket, winning a 2021 Ford Escape! The Goodland woman and a friend drove five hours to Topeka to officially deliver the winning ticket to Lottery Headquarters.

Lennington had tried her luck on the new Sweet Escape tickets before, but thought she’d grab four more tickets on her way to pick up something from a salon where she works.

“I had seen on the PlayOn app that there was a second-chance drawing for a Ford Escape if you entered those tickets, so I thought I’d buy a few more that night,” the winner said. “It was the last of four Sweet Escape tickets that showed a car symbol and I used the PlayOn app’s ticket checker to make sure I won the prize!”

The local cosmetologist immediately told her three children and friends, who are all happy and excited about her luck! The win didn’t surprise Lennington, though, who says she’s always known she’d win a big prize someday and has a feeling she will probably be back to claim something else in the future.

As part of the prize, Lennington will be able to choose how to customize her new Ford Escape. “I’ve narrowed the colors down to four—deep gray, deep blue, white metallic, and black. I’m also thinking about leather, remote start, and new wheels just to make it look nice,” she shared.

The winning ticket was sold at Casey’s General Store 2954 at 320 E. 8th St. in Goodland. There is still one top prize left in the $5 Sweet Escape instant scratch game, as well as thousands in other prizes! Players can also submit all non-winning Sweet Escape tickets into PlayOn to be automatically entered into the Kansas Lottery’s second-chance drawing to win a 2021 Ford Escape!