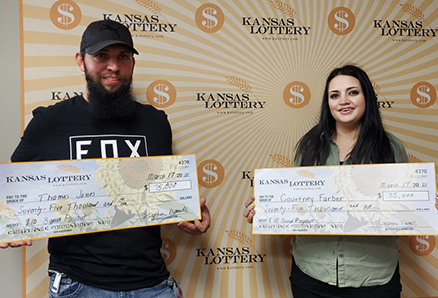 A Wichita couple has claimed their own pot of gold after winning $75,000 on a Kansas Lottery instant ticket! Courtney Farber and Thomas Jones made an extra trip to their local Dillons to buy some groceries for Jones’ mother and grabbed a few more lottery tickets while there. It was the second of three $10 Bonus Payout tickets they had purchased that revealed the top prize!

“You never think you’re going to get the top prize,” Jones added. “And I still didn’t believe it until we came to Topeka to claim it.”

After the couple’s initial disbelief wore off, they shared the good news with Jones’ mother after delivering the groceries. According to Jones, his mother was “happy and excited” for the couple, and told everyone about their good fortune.

“Doing good for Mom, and we got good back,” Farber added.

The couple plans to use the money to add a garage to their home, give a little to family, and save whatever remains.

The winning ticket was sold at Dillons 34 at 3932 W. 13th St. N. in Wichita. There are still two top prizes in the $10 Bonus Payout game, plus thousands in other prizes!