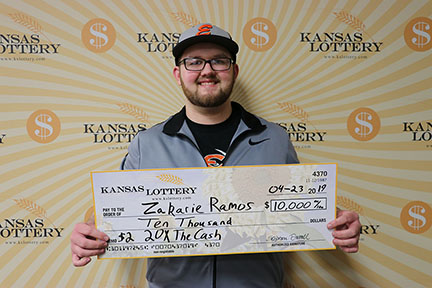 It was a lucky feeling 20-year-old Zakarie Ramos couldn’t explain or shake. On his birthday, Ramos said he had an inkling and decided to buy scratch tickets.

"I don’t always buy tickets but my mom does. We were at the gas station and as she was buying some tickets, I decided that since it was my birthday I’d play too,” Ramos explained. “I bought two $2 tickets and we went home.”

“I kept revealing spots that said $1,000 winner, or $100 winner with a 10 times multiplier,” Ramos said. “When it was all over, we had to get out a notepad to add everything up. That’s when we realized how much I had won. It was awesome!”

Ramos said he discussed some ideas with his family on how to spend the money, adding this is a birthday he’ll never forget.

“I think we might take a little family trip this summer, so some of the money could go towards that. The rest I plan on spending slowly and smartly. I don’t plan to just burn through it,” Ramos said.

The winning ticket was sold at Casey’s General Store 1930 located at 213 Washington Street in Ellis. There are still five $10,000 top prizes, as well as thousands in other cash prizes left in the $2 20 X the Cash instant scratch games.