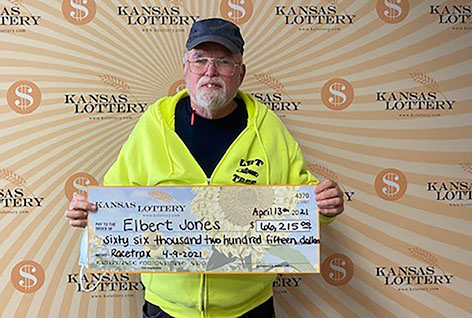 Every week you can find Elbert Jones of Paola at a local restaurant, unwinding after the long day by playing Racetrax with the Kansas Lottery. He’s never won a big prize before, but now his name is etched in Lottery history after winning $66,215 on a Superfecta bet!

The prize is the largest won in Kansas playing Racetrax, an exciting computer-animated lottery game that offers the thrill of horse racing, with new races every five minutes and thousands of different ways to bet and play!

“I like to pick my horses and then play that same combination for multiple races” said Jones. “For this ticket, I picked a Superfecta with horses 7, 5, 8, and 11 with the Racetrax bonus. I played that for a couple hours. I spent around $60 in tickets, but they paid back much bigger than that!”

Jones said he didn’t realize what he won at first, and that the worker at the restaurant even played a prank on him once they figured out how much he had won.

“They scanned the ticket and it said to redeem in Topeka, so they pulled up the app on their phone to figure out how much I had won,” Jones said. “They handed me the ticket and said I had won $6,000. I was already so excited! After a few moments they told me that I didn’t actually win $6,000, but I really had won $66,000! I couldn’t believe it!”

Jones, 73, doesn’t work full time anymore, but he does work at a local auto shop to make some extra cash. He said he’s already told them that he probably won’t be needing any hours anytime soon!

“When I called them and told them how much I had won, they said ‘Well, I guess you won’t be coming by anytime soon’” Jones said with a laugh. “I told them that it would probably be a while, and they said that was fine.”

“I’m not exactly sure what I’m going to do with all the money yet, but I know I’m going to give some to my two sons, and I’ve always really wanted a zero-turn lawn mower,” Jones said. “So I’m going to get myself a really nice zero-turn mower, and the rest I will put into savings or maybe do some investing.”

The winning ticket was purchased at Papa C’s BBQ Bar & Grill at 807 South Silver Street in Paola. Racetrax tickets can be purchased at any Kansas Lottery retailer, and the game can be watched in person at retailers across the state or live streamed on our website here. For more information on Racetrax and all other Kansas Lottery games, visit our website www.kslottery.com.