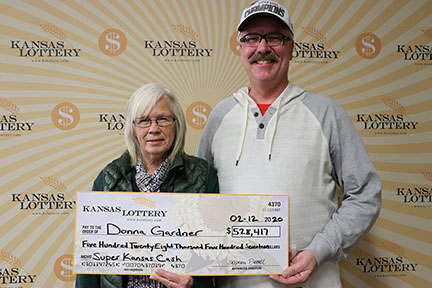 A snowstorm and slushy roads would not keep Donna and Alan Gardner from making the trip to Topeka to claim their $528,417 Super Kansas Cash jackpot!

The Gardner’s didn’t even know that they had a winning ticket until late Tuesday night! “The tickets were still in my bag from when I bought them on Friday. I didn’t think to check them until Tuesday evening around 5:00 p.m.,” said Donna. “I was looking at the numbers and then I found the winning set. I must have checked it 15 times!”

Donna was so excited to tell Alan, but he wasn’t home from work yet. She finally broke down and called him around 5:30 that evening. “I called Alan and asked when he was going to be home, and he said it would be at least another 30 minutes. I was too anxious to wait, so I told him over the phone. He didn’t believe me at first until I told him the numbers!”

“When we looked at the website, we saw where the jackpot for the next drawing was $100,000, so at first we thought we had won $100,000,” Alan said with a laugh. “It wasn’t until we remembered that the jackpot had reset that we looked at the previous numbers page and it showed our win as over half a million!”

The couple said they plan to put a big chunk of the money back into savings, but they also have some ideas to put their good fortune to use.

“We’ll put about two-thirds of it into savings, and then we need to do some home improvements and expansion. We have a big family and we’ll definitely be giving some out to them as well,” said Donna. “And we were already planning a trip to Seattle, so now that trip will be a lot more fun!”

The winning ticket was sold at Kwik Shop 752 on 522 Ames in Baldwin City. For selling the ticket, the retailer is eligible for a $1,000 selling bonus. Super Kansas Cash is a Kansas-only game that draws every Monday, Wednesday, and Saturday, with a starting jackpot of $100,000. The next Super Kansas Cash drawing will be tonight for $110,000.