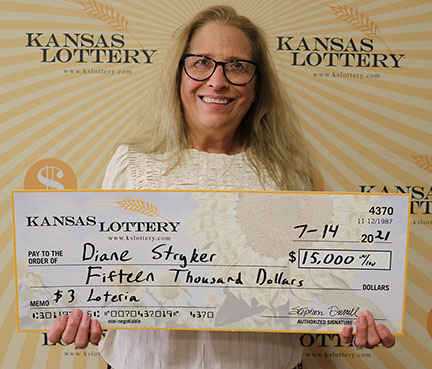 TOPEKA, KAN. – The series of events that lead to Diane Stryker of Marysville winning $15,000 is a winding story, full of twists and turns, highs and lows. It eventually ends with her celebrating a big win at home with her best friend after hitting the top prize on a $3 Loteria instant ticket.

“It all started last week when we tried to go to a casino in the early morning. We get there, and the casino is closed,” said Stryker. “So we stopped at a gas station on the way home and decided to buy some lottery tickets, which I hardly ever play. I won $31 on different games, and I used those winnings to keep playing all week.”

Stryker used her winnings to buy some more scratch tickets later in the week. She used the same “lucky quarter” to scratch her new tickets, which included a $50 winner! She then waited a few days before deciding to cash that ticket in and purchase even more tickets to play.

Stryker didn’t believe her luck at first, so she called the Kansas Lottery office to confirm her win. Once she got confirmation, it sunk in that she had won a big prize!

“I never win anything, so I am still in shock. I can’t believe how lucky I am throughout all of this!” she added.

Stryker says she plans to use the winnings to pay off some bills and debt, but she is definitely going to make one purchase for her family that she has been looking forward to buying for a while.

“I’m going to purchase a swing set for my granddaughter,” Stryker said with a smile. “It’s going to be really nice. She wants one with a slide and everything, and now I can finally get her one!”

The winning ticket was sold at 12th Street Liquor at 200 North 12th Street in Marysville. There are no top prizes left in the $3 Loteria instant scratch game. Players will have six months to claim any remaining prizes in the game before they expire. For a list of all active games, ended games, and prize expiration dates, see the Kansas Lottery website here.