Wamego Man Cashes in Two Winners at Once! 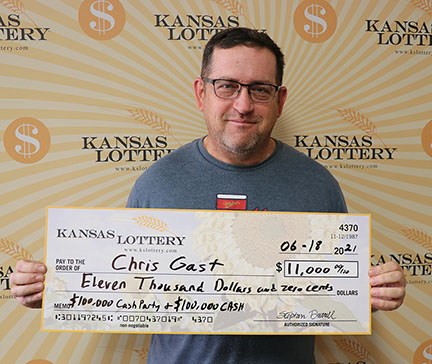 Christopher Gast of Wamego is a dedicated Kansas Lottery player, and he follows a pretty tight daily routine. On his way to work each morning, he will typically stop and buy a couple of instant scratch tickets while he drinks his morning coffee. His daily routine has led to not one but two big prize wins in the past two weeks, totaling $11,000 in winnings!

“I play about every day, but I’ve never won anything this big,” Gast said. “I’ve won $1,000 or other prizes here or there, but this was unexpected.”

“I bought the ticket and a coffee, and scratched it off there in the store. Right when I finished scratching it, I realized that it had to be a pretty big win,” said Gast. “Before I could leave, a co-worker popped into the store as well, and he saw how much I had won. Before I even got to work, everyone already knew!”

Gast said he had to wait almost two weeks before he could get a weekday off to come claim his prize. In that time, he got lucky again at the same store, with his same routine, this time with a $1,000 win in the $20 $100,000 Cash game!

“Once again, I scratched the ticket off in the store and saw where I had won another prize that would have to be claimed in Topeka. It was good timing since I was already planning a trip up there for the first ticket!” Gast said.

Gast already has plans for what to do with his lucky winnings. “I collect coins, and I think I’m going to try and find some new coins to add to my collections,” he said. “After that, we are in need of a new air conditioner at the house. We’ve already got an estimate and we should be able to pay for all of it with the prize money, which is going to be super helpful.”