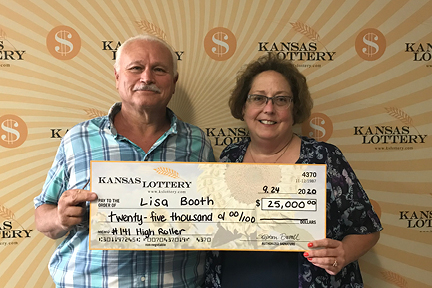 An Augusta woman has claimed a top prize on the Kansas Lottery’s $5 High Roller ticket! Before meeting her daughter for lunch, Lisa Booth decided to grab something to drink at a nearby gas station. While there, she picked up one $5 High Roller ticket and immediately scanned it to see what she won. After scratching the whole game board off the ticket, Booth realized she won a stunning $25,000!

While Booth usually buys the $10 Play Sampler – which includes a mix of Powerball, Mega Millions, Lotto America, Super Kansas Cash, Lucky for Life, and 2by2 tickets – she bought the High Roller ticket on a whim.

“I’ve played the High Roller game on and off, and this time I just decided to go for it again,” Booth said. “I haven’t won anything this big and I was shocked I won $25,000!”

Booth’s family couldn’t believe her luck either. “My daughter and son were both so surprised! And one of the children I foster told me, ‘Lisa, if anyone deserves it, it’s you.’”

Booth plans to use the money to pay bills and pay off her house to be debt free before her husband, Danny, retires. “We’re super excited, super thankful, and so blessed,” she added.

The winning ticket was sold at Jump Start 3 at 115 E. 7th St. in Augusta. There is still one $25,000 top prize left in the $5 High Roller instant scratch game, as well as thousands in other prizes!