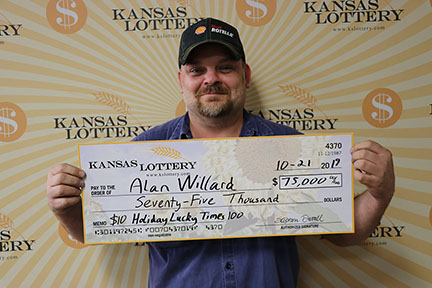 Alan Willard of Osawatomie was on quite a hot streak last weekend. He won some cash at a casino and was feeling lucky, so he while he was getting gas he decided to pick up some scratch tickets. That decision paid off with a $75,000 top prize win!

“I don’t play scratch tickets that often,” said Willard. “I was feeling lucky so I decided to try them out. I spent $20 and won $65 that first time, so I was already in a good mood!”

Next time they stopped, Willard decided to buy some more tickets, and that’s when his good luck turned into great luck!

“I decided to try some of the Holiday Lucky Times tickets, so I purchased them and took them home,” Willard said. “I sat on the porch with my wife and we scratched them off, and that’s when I realized I had a big winner! I still can’t believe my luck.”

“We went back to the store to verify the ticket and get a claim form, and then I called my brother to tell him about how my luck just kept getting better,” Willard said with a smile. “He asked if I could send some of my luck his way!”

Willard says they plan to use the winnings to pay off their car and finish some home remodeling they’ve been working on this year. The rest will go into savings.

“We might take a vacation, too,” Willard added. “We haven’t taken a real vacation in a while, so I think this is the right time to go!”

The winning ticket was sold at Casey’s General Store 1977 on 400 6th Street in Osawatomie. There are still two top prizes, and thousands in other cash prizes, left in the $10 Holiday Lucky Times 100 instant scratch game.