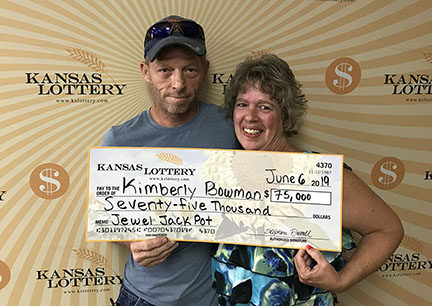 Kimberly Bowman left her house to run what she thought would be typical errands. However, an unexpected stop at a convenience store led to a $75,000 surprise!

Bowman and her husband Carl have bought $10 Jewel Jackpot instant scratch tickets multiple times each week for the past four months. The two estimate they bought 50 tickets before finding this diamond in the rough.

“We never expected this! We were playing for fun and if we won $5 here or $50 there, it was just fun,” she explained. “This was just completely overwhelming and unexpected.”

On this particular day, Bowman said she was heading home after finishing her errands when she stopped to buy a few Jewel Jackpot tickets. However, the usual store she buys tickets from was all out, so she went across the street.

The couple added the win couldn’t come at a better time since they are in the middle of a house renovation and their 25th wedding anniversary is just months away.

There is still one $75,000 top prize remaining in the $10 Jewel Jackpot instant scratch game, as well as thousands in other cash prizes.