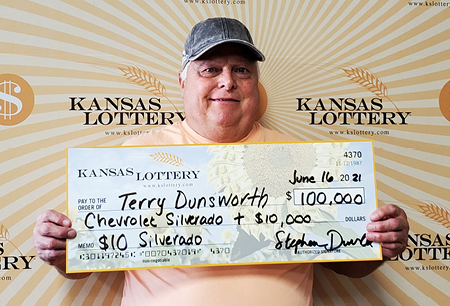 A Hutchinson man has claimed the first top prize in the Kansas Lottery’s brand new $10 “Silverado” instant game, winning a 2021 Chevrolet Silverado and $10,000 cash! Terry Dunsworth had purchased two Silverado tickets in his weekly haul, and the second ticket he scratched won the Grand Prize worth $100,000!

“I had scratched off the ticket the day after I bought them and didn’t think much of it. But then I went to check it on the app and I couldn’t believe it! I had to ask my wife if I was reading it correctly,” Dunsworth said. “I’ve been playing every week since the Kansas Lottery started up in the ‘80s, but I’ve never won anything this big!”

His wife, Patricia, initially didn’t think it was real, but eventually confirmed that her husband was correct! Excited to claim the prize immediately, Dunsworth made the trip up to Topeka with his family the very next day.

The win is great timing for the Dunsworth family, as they have been talking recently about trading in their current truck as its gained quite a few miles. “We’d just gotten back from a road trip up to Wisconsin, and thought it might be time to trade it in.”

While Dunsworth hasn’t thought too much about how he’ll customize his new truck, he is eager to check out his options when he works with the dealership.

The Grand Prize also comes with $10,000 cash, but the winner says he’ll put the money in savings. For now, he plans to take his wife and their young son to the zoo to celebrate.

The winning ticket was sold at Kwik Shop 769 at 8 N. Main St. in South Hutchinson. There is still one top prize left in the $10 Silverado instant scratch game, as well as thousands in other prizes! Players can submit all non-winning Silverado tickets into PlayOn for their chance be one of ten finalists in the “Summer of Silverado” second-chance promotion to win a 2021 Chevrolet Silverado and $10,000 and other cash prizes!