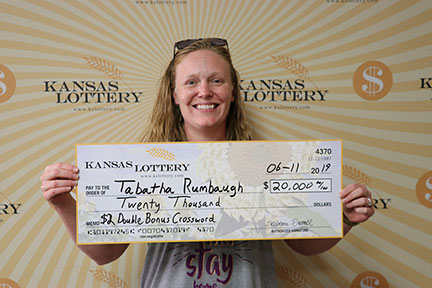 On a beautiful and sunny summer day, Tabatha Rumbaugh made the three-hour drive from Chetopa to Topeka to claim what she thought was a $2,000 winning $2 Double Bonus Crossword instant scratch ticket.

“I was expecting $2,000, which is way more than I’ve ever won before. This is unbelievable,” she said in amazement.

Moments after arriving at the Kansas Lottery, the 35-year-old was speechless and jumping for joy in the lobby after finding out her ticket was actually worth 10 times as much money!

“It still hasn’t actually sunk in yet that the ticket was worth $20,000,” Rumbaugh enthusiastically said.

Rumbaugh explained two weeks ago her husband gifted her the ticket because he knows how much she likes playing crossword puzzles. When she scratched the ticket, she thought she only matched nine words. She said while she was thrilled to win $2,000, she had to wait until she had a day off from work to claim the prize.

“If I had known it was worth so much, I would have definitely come up here a lot sooner,” Rumbaugh added with a smile.

Rumbaugh said while she is still in shock, the unexpected money will go towards her family’s future.

“I’ll be able to pay off our house and be a homeowner before 40, which is amazing,” she explained. “I’ll also give some to my sister and nephew!”

The winning ticket was sold at Carm ‘N’ Dales Convenient Store & Deli located on 1029 Maple Street in Chetopa. There are still 25 top prizes left in the $2 Double Bonus Crossword instant scratch game as well as thousands in other cash prizes!